Worlds Within Worlds 33 — Why All the Divisiveness?

Beneath all that divisiveness I think there might a more elemental force at work, which we’ll explore in a moment. But first…

As societies break apart into opposing camps that find each other repugnant, certain conditions seem to aggravate the bitterness. There are:

Meanwhile the polarization spreads through the government (e.g. courts and legislatures) and finally “reverberates throughout the society as a whole, poisoning everyday interactions and relationships.”

The important question is: Do these things cause a society to come apart at the seams, or are they all just symptoms of a more underlying condition that really causes people to split up into opposing groups?

An Underlying Cause of Polarization?

(Some of this information comes from a recent article on this site about the End Time.)

I think there are spiritual crosscurrents moving powerfully around and through the Earth, clashing with each other and spreading toxic emotional fallout that passes through human minds. And that’s what might be causing social cohesion to break down and burst lately in families, communities, and nations, and throughout world affairs. While those spiritual crosscurrents are always present in our world, causing unrest, they seem to be getting more severe lately as riots, rebellion, gross immorality, and mass destruction break out all around the world.

So, yes, I believe that spiritual forces are behind the unrest, and I base it on:

In 1996 the Seven Ethereals told our INIT group:

We have often given you the real purpose of ITC contacts: Mankind at the End Time should be led back to the principle. Light and darkness shall unite and form a whole again. What people experience now is not the actual beginning of the apocalypse, but only the first symptoms.

(That ITC [instrumental transcommunication] contact was delivered through a computer at our main receiving station in Luxembourg.)

When I first saw that contact, I wondered, What? Light and darkness shall reunite? Why? If mankind has a “dark” side, why not just excise it like a tumor and throw it away? Why not just restore humanity and Planet Earth to the “light?”

The Source and the Shadow 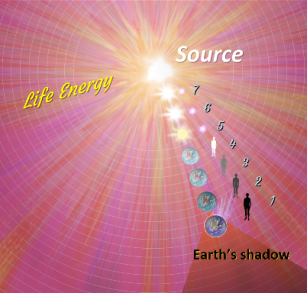 As rich, radiant life-energy is deflected by Earth’s brutal, predatory nature, a spiritual shadow is cast round the planet, in which life-energy is in short supply.

Those questions stewed in the back of my mind for 20 years, until I began to understand life-energy and Earth’s shadow. 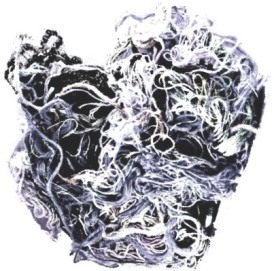 These positive and negative forces tug constantly on humanity, but they’re not like oil and water, which can easily be separated. They’re more like many long strands of fine, light yarn and course, dark yarn that get hopelessly entangled.

And that’s what life on Earth has become over the past tens of thousands of years—love, generosity, and kindness all tangled up with hate, selfishness, and malice.

That’s why finer beings who monitor and influence our world can’t just cut out the darkness and throw it away. It’s impossible to untangle the light and dark spiritual “yarns” here on Earth, which is apparently why an “end time” occurs periodically (thousands of years apart) in order to give our planet a sort of spring cleaning. Collapse of the old gives humanity a chance to evolve into something new and better.

God only knows how that planetary purge actually works, but I suspect it might happen something like this:

So when the ethereal beings observe our troubled little planet and say, Light and darkness shall unite and form a whole again, this intense discord that we’re witnessing today is apparently how that process feels as we get caught up in the mounting drama. Everyone around us is either a potential ally or a potential adversary, depending on their political views.

Some people relish the drama and stimulation that come from divisiveness. Their competitive or predatory or parasitic qualities might help them excel at pursuits involving money, power, and other such worldly pleasures, but their unworldly pursuits are liable to have negative results until they can deal with their dark, symbiotic compulsions.

Other people prefer a peaceful life with less drama and more positive spiritual rewards, so the following conclusion is mostly for them.

While we can’t heal society’s divisions overnight and make everyone suddenly like each other, I believe we can soften the drama in our own life—in our own mind—simply by understanding the general scenario described in this article, which is:

Essentially, we’re all influenced by the spiritual forces around us.

With that knowledge we can then buffer ourselves against shadow influences and their dramas. As explained in the previous article, we simply:

The more we adapt those three steps into our life, the more peace and happiness we’ll enjoy from day to day as the dramas going on around us have less and less impact. Once we choose the lighter spiritual path, we’ll be compelled to contribute to the positive evolution of the planet and mankind.

Then, after our brief lifetime, we leave the Earth behind and “go home” to paradise, closer to the source, with some incredible memories.

21 Responses to Worlds Within Worlds 33 — Why All the Divisiveness?