Way of the Shaman 6: The Shaman Carly

(This, again, was supposed to be the final article in the Shaman series… the story of “Kate,” a woman in the eastern US with serious health issues, who has consulted with various medical doctors and shamans over the past decade. Kate’s story is a complicated one. Her symptoms seem to be caused by a mixture of WORLDLY factors (mold poisoning, Lyme disease, sciatica, osteomyelitis, infected jaw…) and OTHER-WORLDLY factors (a curse, ETs, spirit attachments, her own spirit leaving her body, karma…).  I’ve been corresponding with Kate for a couple of months and carefully studying her situation, but so far I’ve been unable to sort through her many symptoms and piece together a cohesive story. She and I plan to continue corresponding in the coming days and weeks… maybe months… and if a clear picture of her situation comes together, I’ll publish it. Meanwhile….)

Here’s an article that ties together some loose ends about another spiritual sensitive, whom readers of this site have come to know as “Carly.”

Collaborating with Carly last fall was nothing short of amazing. The veil always seemed to open wide in her presence… for better or worse.

On the up side, we received all sorts glimpses into the “shadow world” that surrounds the Earth like a blanket of spiritual residue… and my mind kept stretching a little more each time she sent me a new collection of the photos she’d taken in her stables or in her back yard.

Some of the many fantastic glimpses into the other side that Carly captured with her camera.

On the down side, Carly suffered various physical disorders as spirits moved in and out of her life. I even got a first-hand feel for those spiritual forces during a bout with the flu last November.

I was hoping that the open veil or portal in Carly’s life would lend itself to an ITC bridge (that is, heightened communications from the spirit world through our radios, computers, phones, and other equipment)… but Carly felt herself being drawn to a wider range of shamanic work, which could involve skills for healing, channeling, ITC, prophecy, UFO research, and more.

Over the past several months, we’ve gradually begun to diverge onto different paths of our research. Carly and I still correspond and remain friends. In fact, she sent me an email a moment ago, saying that she sometimes sees four lights or UFOs in the night sky… similar to what Ezekiel described in the Bible:

The four wheels looked like gold-colored, sparkling beryl or topaz. Each gleaming wheel was identical in form to the others, and they appeared to have been constructed and designed as a wheel within a wheel. 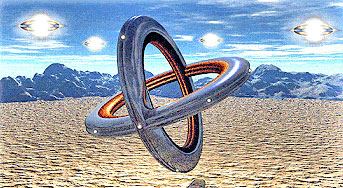 This is an artists depiction of Ezekiel’s description. Click photo for source: bibliotecapleyades.

Main interests are other-worldly matters (www.macyafterlife.com) and worldly matters (www.noblesavageworld.com)
View all posts by Mark Macy →
This entry was posted in Uncategorized and tagged ETs on film, ezekiel lights in the sky, shamanism, spirits on film. Bookmark the permalink.

2 Responses to Way of the Shaman 6: The Shaman Carly