What ITC Groups Could Learn From the Ancients (8.1)

The aim is to get an idea of how ancient information compares to modern information, not just from science, but more important (for me, at least) from ITC messages received during the 1990s.

(Note: ITC, or instrumental transcommunication, is the use of technology to get in touch with the worlds of spirit. During the 1990s, our INIT members (International Network for Instrumental Transcommunication) were actively involved with Timestream spirit group and The Seven ethereals, who sent us a lot of eye-opening information from the other side.)

Granted, I’m going to be real selective in this article with the ancient sources, focusing mostly on the material that correlates best either with the findings of modern science or with our ITC messages… or with both. And for that I have to go way back into prehistory… a journey with lots of twists and turns through caves and temples and pyramids and ziggurats… through sacred archives… in search of answers to some of the greatest mysteries surrounding life on Earth.

I’ve come to believe that ITC messages from The Seven are unequaled here on Earth in their scope and accuracy. Those pure messages arrived in our equipment as ethereal wisdom virtually unfiltered by human minds. Other information available to us humans today isn’t as pure and reliable.

Theories and measurements from science and reports from the late humans of Timestream spirit group seem to be fairly reliable… but prone to misinterpretations and general limitations inherent in human thinking.

Bridging Old and New with ITC

To give you an idea of ITC’s potential in clearing up ancient timelines, here’s a short excerpt from a message that shows connections between the end of the First Epoch (Atlantis), the start of the Second Epoch (Babylon), and the approaching end of the Second Epoch (world civilization today). The message is basically a meeting report involving a group of priests, thousands of years before Babylon, in the waning years of Atlantean culture, at the Sothis temple along the banks of what is now the Euphrates River in Iraq. The report was delivered directly into a computer in Luxembourg in 1998 by The Seven ethereals, or “Rainbow People.” The head priest addresses the other priests:

“This very night, a Spirit of the Rainbow appeared to me and assured me that they will guide us further and lead us when mankind approaches the next dark age. This will be when voices speak from boxes and human beings move through light behind glass. Here on this spot on the river after many millennia, a city will arise that will be called Babylon, and the Second Epoch will begin.”

Again, what I think it means is this:

Likely translation: After the Golden Age of the First Epoch (Atlantis), the head priest Alkbrat tells the other priests at the Sothis Temple, probably some 12,000 years ago or more, at the beginning of the dark age of Atlantis, that the city of Babylon will sprout on that same spot to launch the beginning of the Second Epoch. When that new Epoch (ours) approaches its own dark age (now), ITC will be introduced on Earth to tie up some loose ends in human understanding. The message also implies that various members of the ITC community of modern times are incarnations of some of those Sothis priests. One obscure message, in fact, named several of those recent reincarnations, including Hernani Andrade (Brazil), George Meek and Willis Harman (USA), and one or both of the Luxembourg couple, Maggy Fischbach and Jules Harsch.

(I was a little disappointed to learn that I wasn’t among those Sothis priests, but was told that I had been involved in another project of the time. During a regression some years later I got the sense of maintaining a vast library of knowledge stored on crystals, all destroyed by barbarians, to my horror and anguish. If it was a real past-life experience (and not just my vivid imagination), it could help explain why I’m kind of obsessed with researching and writing on this website… trying to gain back some of what was lost so long ago. Apparently most of us humans today had incarnations back in Atlantean times.)

While scores of ITC contacts delivered to our INIT group have provided this type of world-changing information, they haven’t painted a complete picture. They have left lots of holes in the overall puzzle of our ancient prehistory. So one thing that ITC researchers can learn from the ancients is some of the rich detail that can help fill in the puzzle.

Okay, so, most of our ITC contacts were delivered in the 1990s in the form of either pictures or words.

Likewise, most of the ancient knowledge was recorded long, long ago in either pictures or words (as well as megalithic architecture). 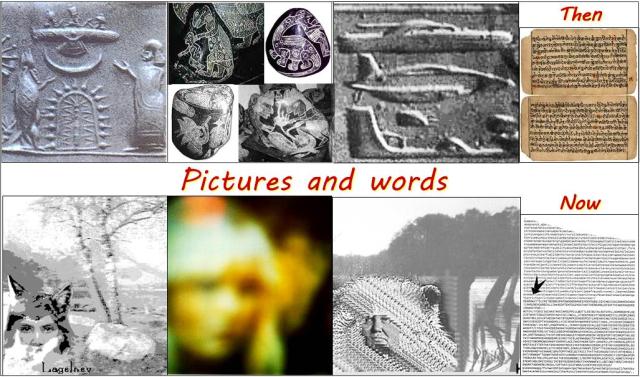 From the West. The most exceptional records from the western world, from Russia through the Middle East to South America, were in the form of massive architecture, sculptures, and stone carvings… suggesting an ancestry of mighty humans with mighty technologies.

From the East. In Eastern culture, most of the ancient truths were recorded by Hindus as sacred texts called the Vedas.  On the plus side, the Vedas are rich with details that ring of ancient wisdom and truth. Some information, such as descriptions of vimana flying machines, seem far too detailed to result from channeling or from spoken legends handed down from generation to generation. There must have been some effective form of record-keeping. Crystalline libraries? Living memory banks in bright minds of superhuman ancestors with lifespans of many thousands of years? Well, however it happened, some ancient Hindu knowledge seemed to survive the ages in good form.

On the minus side, some of the Vedas seem to be channeled information, meaning that as finer truths streamed into our world to be recorded, in the process they were filtered by the meditating human minds… a situation that generally results in some misconceptions.

For example, I suspect some of the Hindu mystics, during their meditations, encountered The Seven ethereals, who have been quietly influencing human affairs, behind the scenes, for billions of years.

I’m not certain that the seven rishis and manus and munis and chiranjeevis are just different interpretations of the same seven ethereal beings, but based on what I’ve learned about The Seven through ITC research, I suspect that could be the case. I suspect that a lot of the rich wisdom and truths inherent in the Vedas were bent a little by human minds trying to understand the other-worldly wisdom… and it doesn’t all fit neatly together into a coherent package.

That said, I do believe that the Hindus have the purest of all religions today, in terms of preserving the ancient wisdom. Hebrew scholars, and later Christian and Muslim scholars, had a tendency to rewrite the ancient truths to better suit mortal minds of the Second Epoch. For example, our ancestors’ Edenite heritage and contention with dinosaurs (or “dissension with the serpent,” as we explore in the next article) came to be translated in western religion as Adam and Eve in the garden of Eden being led astray by a snake.

Anyway, the beauty of all the major religions is not in their study of the ancient past, but in their efforts to uplift us humans toward decency and to get us closer to God or inner truth… which (again, it’s my belief) is a far more important mission than world history (which is probably better suited to science, and perhaps to ITC under the right conditions).

Correlating ancient truths with modern truths in a sensible way that ties everything together neatly… will be the aim of the next article in this series.

Main interests are other-worldly matters (www.macyafterlife.com) and worldly matters (www.noblesavageworld.com)
View all posts by Mark Macy →
This entry was posted in Uncategorized and tagged ancient wisdom, Atlantis, knowing the distant past, megaliths, reptilian. Bookmark the permalink.