Worlds Within Worlds 32 — What Are Morals, Ethics, Laws?

Morals, ethics, and laws help us distinguish right from wrong. They can get complicated, so let’s try to keep it simple while considering:

Getting the Complications Out of the Way First

Earth is an unruly, perplexing place with all the predatory, parasitic, and competitive behavior going on all the time, so choosing the best* way to behave in any given circumstance is complicated. With laws, ethics, and morals we humans try to make those life choices easier for ourselves. (Examples here… and here… )

*(So defining laws, morals, and ethics gets kind of complicated, but what’s really complicated is how we each try to decide what’s “the best way to behave in any given circumstance.” Are the “best” choices the ones that bring us prosperity or safety or retribution or a good challenge or a sweetheart or good health or excitement or victory or dominance?…    The list is endless, and the reasons behind the countless choices are complicated.) 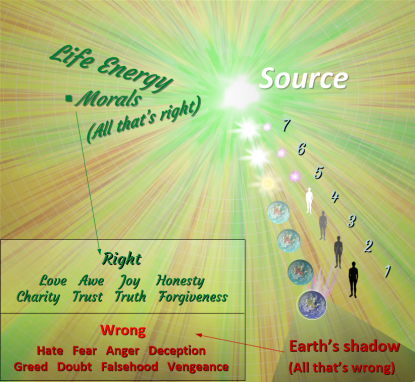 Morals, ethics, and laws are how humans distinguish right from wrong behavior. Everything that’s “right” is embodied in the life-energy that streams from the source to create and nourish the many universes within the 7 arbitrary levels of spiritual existence (including our physical universe at level 1). Most of what’s “wrong” with our world is reflected in Earth’s spiritual shadow. The shadow has been formed by the unruly nature of life on Earth, which deflects some of the life-energy as it tries to enter here from finer spiritual realms. (Read more about the origins of Earth’s shadow… )

Laws like these help keep us safe under dangerous conditions, and lawmakers spell out their laws in meticulous detail, even while the laws themselves are constantly changing (and are sometimes at odds with morals).

Being a “law-abiding citizen” means we have a general understanding of society’s laws and try to obey them as best we can. If we’re uncertain, we can ask a lawyer, since lawyers are trained to know all the laws of their jurisdiction—or at least know where to look them up.

Being an “ethical person” means we often struggle between what we know intuitively is moral-and-right, and what types of “wrong” things we need to do to survive and flourish during a lifetime. (For example, as we rush our critically ill or injured child to the emergency room, we might speed, drive through red lights, and feel angry and frustrated—even hateful—at the slow traffic around us).

Being a “moral person” means committing to the love, joy, truth, and other noble values inherent in the source, and it might involve frequent prayer, meditation, devotion, or other practices, since moral living doesn’t come easily or naturally to us carnal humans. Moral living on Earth, in fact, is a dichotomy. Logically it’s impossible (or at least highly impractical) to be a moral person in a predatory, parasitic, competitive world such as ours, but truthfully moral living is the most wonderful, most uplifting thing we can do in a lifetime. Moral living refines the vibration of our inner spirit, which 1) brings true happiness through good times and bad, and 2) makes it much easier, at the end of a lifetime, for our refined spirit to get settled smoothly into the paradise communities at level 3.

And that’s the simple guide to morals, ethics, and law. The information below just fills in a few gaps and explains morals in more detail, including how morality is defined in finer realms where there are no “wrong” shadow motivations. How do finer spirit beings define morality if there is no right-and-wrong in their world, but only right? They explain that clearly at the end of this article.

Living a moral life on Earth is nearly impossible (logically speaking), and at the same time moral living is the most spiritually rewarding way to live anywhere under any circumstances.

Considering the predatory, parasitic, and competitive forces around us, leading a purely moral life could get us in trouble. We have to be wary. Being too trusting or too loving or too generous with others can put us in peril. Turning the other cheek in a world where fists are flying—or living a life of poverty, humility, and weakness in a world run by wealth and power—will result in suffering and maybe an early death. It behooves us to get a little angry at times… to be a little clever and deceptive… to learn to fight back… to “teach the other guy a lesson” so he quits bothering us. Prosperity and pleasure can only be ours if we learn how to play the game of life on Earth. In any given situation, we need to know when to be a bit predatory, whether to be parasitic, and how to be competitive. Such knowledge is the key to success.

Or so it seems.

(In fact, if you adhere to that logic, then you’re certainly in prominent company. Charles Darwin, Adam Smith, John Maynard Keynes, Thomas Malthus, Ayn Rand, and many others have affirmed those ideas to a greater or lesser degree.)

In truth, once we know the simple secret of life and moral living, we can find true happiness, regardless of the dramas going on around us. What’s that secret?

Once we begin to foster a conscious contact with the source, then we can start to take Earth’s dramas in stride as love, joy, honesty and other “right” motivations prevail in our life. As we gradually start to neutralize and disarm the predatory, parasitic, and competitive impulses that are latent within us, then…

One of The Seven.

In 1995 I was part of a group of researchers and supporters who met in England to form the International Network for Instrumental Transcommunication—INIT—and in 1996 (just before our second annual meeting in Tarrytown NY) our group received a long message from seven ethereal beings who were overseeing our work. The Seven had been quietly observing and supporting humanity across the ages—long before Babylon—so to say it was a pleasure and privilege is a bit of an understatement. Being addressed by The Seven was absolutely life-changing for many of our members.

Anyway, the message from The Seven arrived in a telephone answering device of our Luxembourg members (Maggy Fischbach and Jules Harsch). Here’s an excerpt (actually two short excerpts spliced together) from the ethereal message that addresses morals and ethics. Today—20 years after our group disbanded—I think I finally understand what they were telling us about morals… and I’ll explain that after the audioclip.

“We, The Seven of the Rainbow People, have decided to help and support the way chosen by you in INIT. It is the way of morals, which means to understand, to acknowledge, to devise, and to act….

“Your meeting in Tarrytown is a decisive one… to make true the dream of a strong international association based on morals and on ethics, by giving it not only a fundamental constitution—and sheltering it this way from the wind, the rain, and the storms of pernicious attacks—but also by strengthening love and friendship true, the best qualities of mankind….”

So from that message, it’s apparent that ethereal beings view morality in a much more refined way than we can do here on Earth. They’re part of a vast omniverse that’s nourished by the constant flow of life-energy from the source. That life-energy contains vitality, love, wisdom, knowledge, morals, and all the other qualities that forge life everywhere. That life-energy is spread and tranduced as it streams through the minds of brilliant entities in a countless succession of universes that get ever denser as they extend farther and farther from the source in vibration.

Morality, from their perspective, is simply to understand the information being delivered to them from finer realms, to acknowledge that information, to devise or change it to apply to their own world and universe, and to act accordingly.

They were telling us INIT members that morality on Earth, ideally, would be likewise: To understand the information that’s being streamed constantly to Earth in the life-energy from finer realms as it tries to nourish our world through our minds, to acknowledge the information, to devise it in ways that help the world, and to act on it.

Trouble is, on Earth we also receive dark influences from Earth’s shadow where life-energy is in short supply. When we try to understand, acknowledge, devise, and act on those nasty and offensive bits of information that leak into our mind from the shadow, it just causes problems in our world and in our lives.

So our personal morality here on Earth can be supported (and sometimes complicated) by ethics and laws, which we can use as a sort of filter to contend with our dark motivations from the shadows.

But the only way to open up a clear channel to finer realms is through moral living, as described earlier in the article:

12 Responses to Worlds Within Worlds 32 — What Are Morals, Ethics, Laws?