(Note: Here’s the latest article I published on the worlditcnet website for managing ITC groups. You can review the article below, or visit the worlditcnet private site: http://worlditcnet-private.weebly.com/managing-change.html)

Three important considerations about managing changes in an ITC group:

Businesses Have To Change

Big companies today know a lot about change, thanks to globalization, new ideas, and new technologies.

Before the Internet, companies were relatively static and unchanging in their policies and strategies, which fostered a sense of order and reliability in the organization.

Now, with the free flow of new information and better ideas everywhere, they have to be agile and adaptable in a consolidating world… and they have to contend constantly with growing pains. To survive, companies have to change with the times.

CEOs and managers can’t just hope that everyone in the organization is magically on board with the changes.

They can’t tell the employees, “Look, things are changing around here; deal with it.”

It’s natural for some people in an organization to bristle and rebel in the face of change, so companies have to navigate through uncharted waters while making sure everyone on board understands, and to the greatest extent possible supports, the new course settings.  (Read more… )

There are a few simple tools and techniques that ITC group facilitators could adapt from business, and we’ll look at those in a moment.

But first let’s bear in mind…

ITC Is a Special Case

ITC groups find themselves in a unique position amid all the transformation going on in the world. Our spirit friends at the third level live in a world that is a reflection of our world, and it’s an on-going challenge for them to adapt to our changing Earth. As the ethereal being Technician told our INIT group:

As new situations on Earth are created, we stand ever ready for new changes to echo here. Here these lead not only to changes in our planet but also to the dimensions or planes. New changes then need to be made here to compensate. The solution that we at the moment have decided upon is to try to reach the core of our world through which, when you inform us, we would be able to create anew. People who read what you write would discuss it with others and slowly construct a stable direction of thinking. To be sure, people here live happily and peacefully and can ‘straighten out’ the many problems that you manifest.

Even if your side is not a mirror image of the third dimension, and this side also does not present a mirror image of your Earth, we mutually influence each other. We are concerned about the unresolved problems of the Earth and always seek possibilities for helping you. Many times we can do nothing and must wait until someone on your side takes the initiative.

I believe Technician is referring especially to global cosmologies; that is, how humanity of a particular era understands the structure and behavior of the Earth in relation to the vaster universe. As mankind’s sweeping view of the world changes, the spirit worlds on the third level (which are closely tied to our world) try to reshape to conform to the new mental construct of us humans on Earth.

I also suspect there is a sensitivity in the spirit worlds to changes on Earth of a smaller scale, especially changes that happen in an ITC group. Why? Because ITC is one of very few activities on Earth in which the main mission of us carnal humans is to foster a working relationship with our spirit colleagues at the third level. (Other activities include spiritual healing and mediumship.)

So one rule of thumb for an ITC group could be…

Take the initiative to develop a stable organization with a clear mission and afterlife model, and with a modern communication system (computers, phones, radios, TVs, and so on)… and stick with it. Be cautious of change.

Keep things stable. How do members communicate with each other? In a worldwide, multicultural ITC network they probably communicate mostly via computer and Internet, and perhaps cell phones.

How do our spirit friends communicate with us? The goal of an ITC group is to make the big step from telepathy, mediumship and dreams (the most natural ways of communication in the spirit group) into a sort of “marriage” of thoughts, attitudes and equipment on both sides of the veil… a resonant living system across dimensions… so that the spirit team can deliver information to us through the electromagnetic energies of our modern communication devices.

Key to our ITC groups are certain rare individuals who are especially gifted for ITC work… whose minds act as an “emotional lance” to pierce the veil and create realities with focused passion.

These individuals might awaken rather often from lucid dreams and recall visiting and meeting with their good friends in the spirit group during nocturnal dreamtime journeys.

Each ITC group should probably have a member like this (someone with an ITC disposition) whose anchoring presence enables ITC contacts through the equipment of any of the other members of the group.

Then, the communication devices of all of the members become available to the spirit group as they develop and master the techniques of making ITC contacts… delivering voices, texts, images, and video streams to us through our equipment.

It’s important at this point for members to be grateful for and open to all contacts received by any members. Be trusting but discerning about the ITC contacts. Rely on the spirit team to verify the validity of any “questionable” contacts.

Avoid feelings of envy and resentment about who gets more contacts or better contacts. Avoid fears and doubts over the nature or content of the ITC information.

If you feel any negative emotions like these, it’s your responsibility as an ITC group member to spend more time in your personal workspace to restore trust, sincerity, and good will toward your colleagues on both sides of the veil.

At this point the ITC group and its transdimensional network become a self-sustaining system.

Rely mostly on the standard devices (TVs, radios, computers, etc.) of all members.

Allow for change. If some members wish to experiment with new devices and techniques, this can be done “off the grid,” usually in close collaboration with the spirit group, who have many other-worldly conditions and requirements that have to be taken into account.

These other-worldly conditions include the illusory (to them) nature of material time and space, and the immense challenge on their side of simply locating and monitoring us on Earth and becoming familiar with our equipment.

If the new ideas, developed by members and the spirit group, eventually prove to be useful, they can be moved “onto the grid” (adopted as part of the ITC group’s inner workings) through a change protocol, which I describe below.

The easier and more stable we can make it for our spirit friends, the more they’ll appreciate our partnership, and the better able they’ll be at making ITC contacts.

So, the bottom line: Sustain a stable organization… a clear mission and afterlife model, positive attitudes, the use of reliable equipment rarely changed, and so on. Start out with a stable communication system and organization, give our transpartners the opportunity to adapt to it, and then we all work together, from both sides of the ITC bridge, to let the system evolve.

Most important, make sure the private website simply and clearly describes the ITC group’s stable system, including the communication tools and techniques used by the members for interacting with each other and with the other side.

Once we have a stable organization and communication system in place, then we can start thinking about the higher purposes and goals of ITC research, and we can be more accommodating to change.

What We Can Adapt from Big Business

Meanwhile, there are a few rules of thumb that we can learn from big companies today to help our ITC groups grow and change smoothly. We can round up the vast knowledge that business and industry have learned about organizational change, and then boil it down into a simple change protocol that might work well for an ITC group. That’s what I’ll try to present here.

In a nutshell, here’s how it could work.

Types of changes. Any significant change to the group, its members, and its techniques and devices should be handled carefully, monitored, and recorded. The changes could include:

These are just a few examples of the kinds of changes that would be monitored and recorded over the life of an ITC group… and they could always be accompanied with a change form.

Change form. For better or worse, filling out forms has become an important part of most organizations. The heart of an ITC group’s change protocol could be a simple form like this, accessible online from the private website: 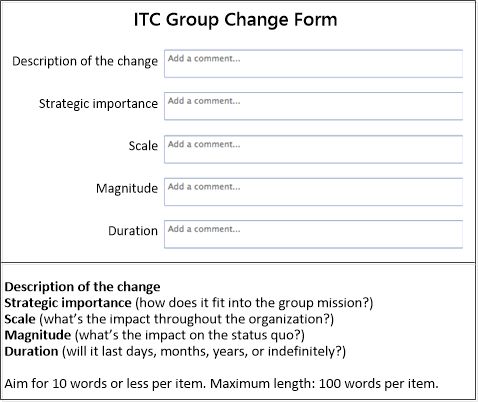 For routine changes, such as members joining and leaving the group, the fields could be filled in with a brief comment… new member, or left the group.

If a member replaces his computer or phone or buys a new TV, include the model name and number somewhere on the form, along with a description.

For more crucial changes, such as rewriting the group mission or afterlife model, or adopting a new type of communication device or a radically new technique for ITC experiments, fill in the items of the form in as much detail as necessary.

Change committee. A small, informal change committee could consist of a couple of facilitators and a couple of operatives who work together with the individual(s) who originally submitted the change form. They could follow a few basic steps like these:

The change is not approved and adopted until it has spread throughout the membership and has unanimous acceptance.

In most human groups, some members resist change. It’s important to overcome such resistance through empathy and dialog.

Members who resist all changes routinely, perhaps out of fear or insecurity, might eventually be moved to provisional status in order to do inner work in their private workspaces, until they become more comfortable with the group.

Changes are always made through consensus and unanimous agreement.

Any member can submit a change proposal form at any time for any purpose.

No impulsive or reactive changes are ever made by one or more members, including facilitators.

Some changes are simple and could be “rubber-stamped”… for example, one member’s laptop computer gives up the ghost and has to be replaced with a new device. In this case, the change-order form should be processed quickly, and simply issued to all members with no real need for discussion and approval. It’s more of a simple notification to everyone of a small change that is occurring within the group.

Other changes are critical, and everyone’s opinions should be taken into account. For example, if someone wishes to change the group mission or afterlife model, the group should welcome extensive dialog among members to address all aspects of the change… before it is accepted to become a part of the group.

Or, a facilitator might wish to engage the ITC group in a project with an established scientific institution or a religious group. An interactive project like this will expose the contact field to the thoughts and attitudes of the scientists or religious followers of the outside group. Skepticism and religious beliefs will have a profound impact on the contact field, causing instability… so it’s vital that the ITC group members get to know the individuals in the outside group before establishing any collaborative project.

Sources for this article:

Main interests are other-worldly matters (www.macyafterlife.com) and worldly matters (www.noblesavageworld.com)
View all posts by Mark Macy →
This entry was posted in Uncategorized and tagged Managing change in spiritual groups. Bookmark the permalink.