Worlds Within Worlds 05 — Rise and Fall of an Epoch 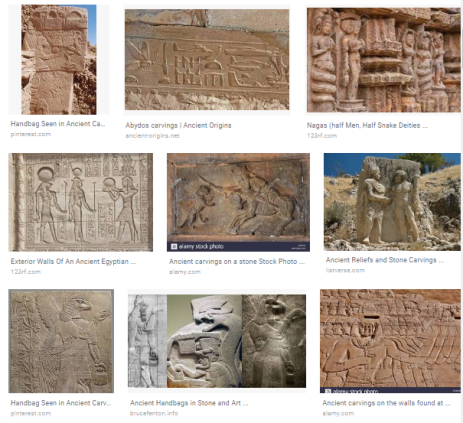 Note: Our INIT organization (1995-2000) got a lot of insights from the other side through our radios, computers, telephones, and TVs… especially a series of messages from “The Seven” ethereal beings, who facilitated our ITC contact bridge after having quietly watched and supported humanity across the eons. The Seven told us the Second Epoch of modern humanity began in Babylon. I don’t recall them mentioning the First Epoch, but it’s safe to assume that it encompassed that megalithic civilization from the previous article, which was run by Titans who made a mess of things and eventually destroyed their culture with their massive technologies. Much of that history is described and depicted in ancient texts and carvings.

So the previous article looked at our ancient past…

Now we begin to explore the Second Epoch, which started in Babylon then saw the rise and fall of a long succession of empires up to modern times. Probably the best way to get a 15-minute glimpse of the entire Second Epoch is to watch a youtube video (below) posted by Ollie Bye and Drex. While watching the video, try to imagine the many advancements that are happening along the way:

Here’s the video (after the video begins, you can click on the square at the bottom right to see a full-screen presentation, and click “Esc” to return to the small view):

Now, with the video and our noble-savage advancements fresh in our mind, let’s think about the many spiritual forces that have influenced our lives and on our world through it all. Think of the most beautiful music, the most awe-inspiring buildings, and the most amazing technologies in the world today… the Golden Age of the Second Epoch… and realize that these ideas were delivered silently into the minds of receptive humans by finer spirit during times of reflection. Then we begin to get a sense of the bigger picture.

If we can do all of that—envision the spread and advancement of civilization with the ever-present influence of spirit—we then have a good foundation from which to explore the Second  Epoch in the coming articles in this series.

Meanwhile, let’s take a close, intimate look at how an epoch begins and ends.

The End of an Epoch

Today (according to the contact below) we’re nearing the end of the Second Epoch, which began in Babylon.

It’s probably no coincidence that “Marduk” was the name of the main Babylonian god who had vanquished the serpent god Tiamet. The Babylonians inherited important shreds of evidence that had survived the end of the First Epoch and tried to make sense of it all… evidence about our Edenite ancestors from Marduk, their battle with dinosaurs, and their descendants, the Titans.

[In fact, one might guess (and this is just a guess, whereas most of the information in this ancient cosmology is based on evidence) that some of those same Seven ethereal beings (“spirits of the rainbow”) who powered and guided our ITC bridge are themselves former Edenites… finer spirit beings who had once donned physical bodies, had become marooned on Earth for billions of years, and had finally returned to the worlds of spirit during the First Epoch to help manage the unwieldy affairs of Earth from a safe “distance”… from behind the scenes.] 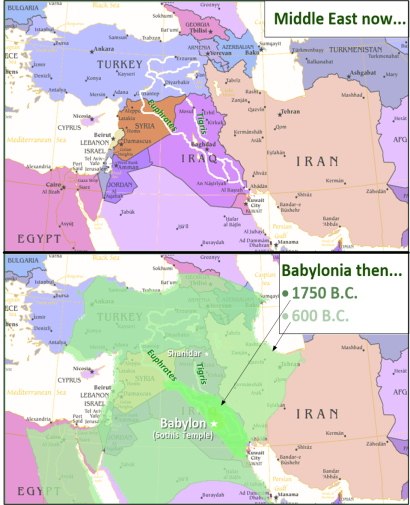 I find no trace on the Internet of an ancient territory called Shanidar; perhaps it was near the site of Shanidar Cave, today at the northeast corner of Iraq.

One of our most extraordinary contacts from The Seven recalls the last terrible days of the First Epoch. It’s about a group of priests who held their final meeting at the “Sothis Temple,” which was located along the banks of the Euphrates River where Babylon would arise thousands of years later:

Alkbrat of Shanidar was the last one to enter the great temple hall. He walked bent over and was slow of step. His white hair and flowing beard gave him a patriarchal appearance. He leaned his curved golden staff against the table and took his place at the head of the table. The others in the room remained silent; they knew they had to wait until the venerable old man opened the assembly. It was the last time that they would meet like this in the Sothis Temple, for the barbarians were already at the outer walls of the city. Alkbrat raised both hands and began with a clear, firm voice, which, despite his age, sounded full and strong:

“Participants of this project, my brothers and sisters, the Golden Ages of our culture are at an end. Our civilization has become so indifferent that the innumerable dead, who die of starvation and disease, have become a common sight for you. They elicit no more than a sigh, or in the best case, a tinge of protest. The streets of our cities have become the residence of legions of the homeless; drugs rule the world; men murder their brothers on a scale and with a bestiality that has not been seen since the (previous) dark ages.

“At the same time, thousands of lesser acts of violence and abominations have become so customary that they hardly seem real. We have tried to avert the evil with our Project Sothis, but we have failed. We have made the mistake of reaching an understanding with the students of Nephtos, because we believed that as the caste of scientists, they would help us convince the people that the Gateway, the Space-Time Arch, was the last hope for our sick world. But we have erred. They have measured, minced and counted, and again, measured, minced and counted, and could not recognize the true meaning of our search, because they could not recognize the truth that stood behind our endeavors: the inseparability of the spiritual from the material world—the opening of the door between these worlds. So we lost precious time, and our adversaries used our weaknesses. Some of us have fallen away and let themselves be lured by passing fame and Mammon; others were intimidated and have lost their belief in the righteousness of our good cause.

“We do not wish to bear them ill will, but rather pray that someday they will recognize their error. But we must be conscious that pride, covetousness, and arrogance are guilty of bringing our Project to ruin. Today we meet for the last time; tomorrow some of us will already no longer be among the living; others will be in flight. We know that our bodies, which we now inhabit, are only houses from which we will soon be moving. Where to and when we know not, but now we want to speak the last vow, and to give our word, that at the given time, in another place, with another appearance, and under different names—some will be men and no longer women, and vice versa—we will no longer remember here and now, but when we meet again, we will know that we belong together. This very night, a Spirit of the Rainbow appeared to me and assured me that they will guide us further and lead us when mankind approaches the next dark age. This will be when voices speak from boxes and human beings move through light behind glass. Here on this spot on the river after many millennia, a city will arise that will be called Babylon, and the Second Epoch will begin.”

Alkbrat arose. The golden threads that were interwoven through his deep blue garment shimmered in the glow of the candles. The others also arose and, extending their hands, they spoke the vow.

So it came to pass, and it is being communicated to you (INIT members), because you have found each other again, and this time have passed the first part of the test. Continue to watch out for false friends and know that the journey is a long one.

(Details and implications of that contact can be found here… and note: several of my fellow INIT members and our supporters were apparently modern-day incarnations of those Sothis priests; I was not one of them, though I apparently had other jobs during the First Epoch’s megalithic civilization, as did most of us humans today in our early incarnations.)

The Seven ethereals told our INIT group, through a computer at our Luxembourg station:

We have often given you the real purpose of ITC contacts: Mankind at the End Time should be led back to the principle (God, or the source). Light and darkness shall unite and form a whole again. What people experience now is not the actual beginning of the apocalypse, but only the first symptoms.

(More about the end time… )

So we today are approaching a dark age—the closing years of the Second Epoch—hence the many illuminating ITC contacts our INIT members received in the 1990s through modern ITC systems, in which “voices speak from boxes and human beings move through light behind glass” (radios, telephones, TVs, computers…).

Recently I’ve come to suspect that the ultimate purpose of INIT’s ITC bridge was to advance to become the “gateway, the space-time arch” mentioned in the Sothis contact above, which could somehow help humanity with its problems that are bound to worsen in the coming decades.

And that raises several questions:

I have only a vague idea of the answers, but I’m hoping to have most of the answers by the end of this series of articles. So, of course, any comments and opinions from readers are more than welcome in the coming weeks and years.

Meanwhile, as for my part in all of this? For this lifetime my main talents are probably just to help figure it out and spell it out, not to be involved in the actual development. I was a technical writer, after all, not an engineer or scientist.

First of all, then, I’m trying to figure out what’s been going on with…

And second, while figuring it all out, I need to present it as clearly as I can… which is the aim of these articles.

And beneath it all is that ever-mysterious gateway, or space-time arch, which I’ll write about once I know more. Until then, it’s time to bring this series down to earth.

Next article:
Growing up in the Second Epoch

Main interests are other-worldly matters (www.macyafterlife.com) and worldly matters (www.noblesavageworld.com)
View all posts by Mark Macy →
This entry was posted in Uncategorized and tagged How long have people been on earth?, where did humans really come from?. Bookmark the permalink.