Worlds Within Worlds 06 — Growing Up in the Second Epoch

The Second Epoch started in Babylon several thousand years ago and is now in its biggest and best (maybe last) Golden Age that will eventually crumble into a dark age.

Whether that collapse happens a few decades from now, or in a few centuries or in a few millennia, probably depends on the choices we humans make.

Not just big choices made by people in power… choices that lead to climate change, rising sea levels, weapons technology, overpopulation, or drug abuse spreading around the globe.

But especially the little, personal choices, noble or savage, that we all make as we walk the Earth and interact with each other.

We’ve all got a part in it.

Meanwhile, we today have all been born into the grueling conditions of the Second Epoch, which include:

We’ll start our exploration of life in the Second Epoch with that last item on the list.

In the big, cosmic picture, the lives of us humans today are fleeting.

If you have a few minutes and an inclination to ponder on population and life expectancy in today’s world, click on this picture to open an interactive diagram (very well done by Cmglee).

Not only do we have short lives, but we spend nearly half of those lives getting up to speed… adapting to family life, making friends, learning about our sexuality, encountering problems and dangers and making mistakes and learning how to deal with it all, going to school, getting exposed to a wide range of human knowledge to see what resonates with us, trying to decide what we “want to do in life,” maybe dabbling with this job and that job, maybe learning at some point that we have “a calling.”

Whatever the case, growing up is about half the struggle of a lifetime on Earth, (as described recently by Richard Rohr in a couple of different ways):

So, what forces shape us as we grow up? Experts have narrowed it down to four (the percentage of influence of each factor is just my best guess after doing a lot of digging): 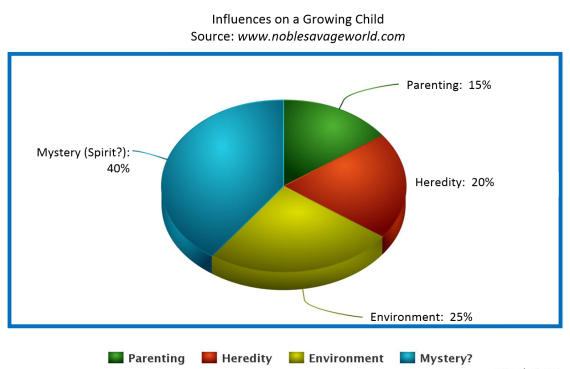 Here’s a simple chart that shows some of the main influences on us growing up. These are just ballpark percentages. They’re not based on hard data from any particular study. I created them with artistic license and gut feeling after reading a lot of articles on line… while trying to get an objective view of those forces that shape our attitudes, intelligence, personality, and beliefs… especially during our impressionable years.

I explored this in another article, so the following is just a summary.

Modern experts often refer to four parenting styles that can help shape their kids’ attitudes and futures. Here are those styles, along with some common terms we often use to describe them.

Four parenting styles are often cited for shaping kids’ attitudes and behavior in distinct ways. The bottom row contains terms I often use. Savage child-rearing would probably work best if we lived in a purely savage, dog-eat-dog world. Noble child-rearing would probably work best in a paradise world in which love, trust, good will, and moderation were a universal way of life. The “authoritative” approach seems best suited for this noble-savage Earth.

It’s easy for parents to take findings like these too much to heart. Especially if their young children or grown children are having problems, it’s easy for parents to blame themselves. Fortunately, more comprehensive studies that consider environment, genetics, and other factors lift most the burden from parents’ shoulders. Turns out, their parenting didn’t have all that much to do with it.

Imagine a river that has a factory dumping chemical wastes into the water. Fish upstream of the factory are healthy and normal, while fish swimming downstream are exposed perpetually to the chemicals. Downstream, the fish hatch, live, and die in a toxic environment. Toxic living is all they know. They have cancer and other diseases, and if we could psychoanalyze them we’d probably find them stressed, depressed and frustrated.

Like a polluted stream, human environments can be subject to all sorts of toxic conditions, such as:

Identical twins, separated at birth and placed in very different families in very different cultures, grow up to be alike in many ways, suggesting that parenting and environment are sometimes less important than the genes we inherit from our parents.

Heredity can play a big role in these human qualities… but there seems to be something even bigger at work behind the scenes. Think about your own siblings and siblings in other families. How similar or different are they. While the qualities listed above are largely inherited, they’re not often distributed evenly among siblings. There’s something else at work here. While these qualities are somewhat inheritable, studies have found that about half of the differences in personality, intelligence, and behavior come from something beyond genetics… something in our around our world that the experts cannot figure out.

Whatever that mysterious influence is, it is not shared by siblings.

So, of all the many complex forces that influence kids growing up, what’s the big 40 to 50 percent that the experts can’t get a handle on? Obviously (to me), it’s spirit… a subject that’s generally taboo among social scientists and other behavioral researchers. Here are some of the spiritual influences on kids:

The best way to minimize the presence and impact of troubled spirits in kids’ lives is to keep children immersed in love, moral teachings, and other noble human behavior… at home, in school, and in society. That way they resonate with and attract finer spiritual beings. It’s a simple rule, and it’s been the teaching of every great religion and spiritual tradition throughout human history. Any form of abuse or treatment that instills fear, guilt and shame in children begins to open doors to the darker realms of spirit.

The more we learn about spirit, the more we begin to see the profound influence which invisible beings inhabiting the various spiritual realms can have on our lives. (More about the spirit realms… )

My afterlife research over the past 25 year has convinced me that spiritual influences can have a more profound effect on children’s personalities, talents, thoughts, words, and actions, than do the influences of their parents, teachers, environment, and genetics.

Main interests are other-worldly matters (www.macyafterlife.com) and worldly matters (www.noblesavageworld.com)
View all posts by Mark Macy →
This entry was posted in Uncategorized and tagged influences that shape children, why am I like this?. Bookmark the permalink.