How Did “The Seven” Shape Human History? (3)

After The Seven ethereals told our INIT group in 1995…

This is the seventh time that we accompany and guide you on your progress toward a free, wealthy, and sane future in which humanity would have stripped off the chains of intolerance and cruelty—a future in which it will be able to establish fruitful and durable relationship with the light, ethereal realms of existence….

… I eventually came to conclude that they were using our INIT group to address humanity of the Second Epoch, which they said began in Babylon, the first great empire after Atlantis… after “the flood.”

In another message to us, The Seven said that during a meeting of priests of latter-day Atlantis long ago, held at the Sothis Temple located along the banks of the Euphrates River in what today is Iraq, the lead priest addressed the others:

Here on this spot on the river after many millennia, a city will arise that will be called Babylon, and the Second Epoch will begin.    (read more…)

Apparently, while Thoth escaped the deluge by airship (see my previous installment), another demigod named Noah survived aboard a large ocean vessel (the proverbial ark). I’ve come to believe that Noah, like Thoth, was part of a superhuman lineage… from his ancestor Enoch, to his son Ham, grandson Cush and great-grandson Nimrod. They were all what we today might call demigods, with lifespans measured in centuries. Noah probably boarded his ship some 10-12,000 years ago, with the final destruction of Atlantis, at the same time that Thoth boarded his airship.

Cush and his son Nimrod played a big role in unifying the survivors and building the Tower of Babel on or near the site of the Sothis Temple, which most likely had been washed away in the deluge. While the timeline of the tower is a bit nebulous, many scholars date it at around 2200 BC… some 4,200 years ago. I suspect it may have actually been built some 10,000 years ago.

Cush was described as a dark-complexioned “sun-god” who later migrated to Ethiopia. Both he and his son Nimrod could communicate with the worlds of spirit… (read more…)… and they probably had portals similar to Thoth’s Halls of Amenti, such as the one he built below the Great Pyramid of Giza. (Read more…)

So… what I take from all this is that Babylon was probably the first of seven occasions when The Seven came close to Earth to accompany and guide modern (Second Epoch) humanity. Egypt may have been the second.

The sixth time probably involved the Jews at the time of Christ… as the number 7 shows up a lot in the New Testament book of Revelations… including:

I believe that The Seven ethereals who were close to our INIT group were the same as the entities mentioned in the Bible as:

… and each of The Seven was associated with one of the 7 churches of Asia, (which Jesus. guided by The Seven, I believe, was trying to unite into a world religion), also referred to in Revelations. 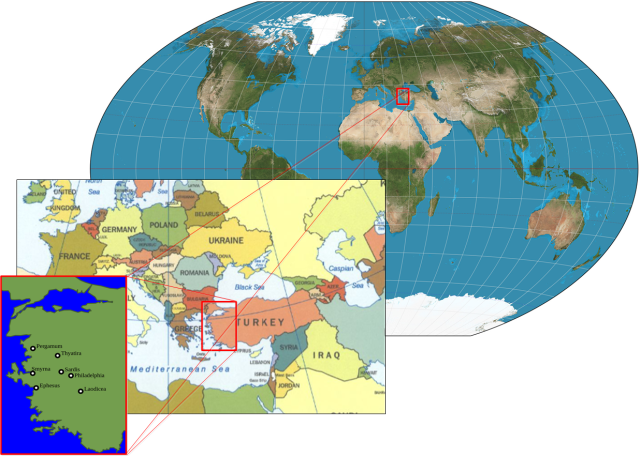 Location of “the 7 Churches of Asia.”

If Noah survived the flood that ended Atlantis, then his ancestor Enoch must have lived before the flood… during the twilight centuries of Atlantis, perhaps some 20,000 years ago.

Enoch first made reference to the 7 Archangels in his first book, naming them Gabriel, Michael, Raphael, Uriel, Raguel, Remiel and Saraqael.

After Enoch, different Biblical writers gave them different names… which may be one reason why The Seven told our INIT group that names are not important to them, and that if we insisted on naming, them, we could call them Technician, Ishkumar, Nsitden, Lagelnev, Mrekklin, Thfirrin… (and a seventh name I’m not sure of).

This picture shows Nsitden in, I believe, two of his forms—in a subtle, genderless human-like spirit body in which s/he glows in rainbow colors (foreground), and as a lighter, more angelic being (right). The picture was received through the television of INIT member Maggy Harsch-Fischbach. (The Seven occasionally reminded us that gender is a reality of the material world, and doesn’t apply to them.)

So, The Seven have had a rich history in western culture and religion. For the next installment we’ll look at their influence on Eastern cultures.

1) Lots of 7s down through the ages
2) The 7 Hathors of Ancient Egypt
3) 7s of Judeo-Christianity: Archangels, lamps of fire, churches of Asia…
4) 7s of the Far East: Rishis, Matrikas, Divine Women, chakras…
5) The 7 Rays

2 Responses to How Did “The Seven” Shape Human History? (3)