Worlds Within Worlds 22 —It’s Between You and God 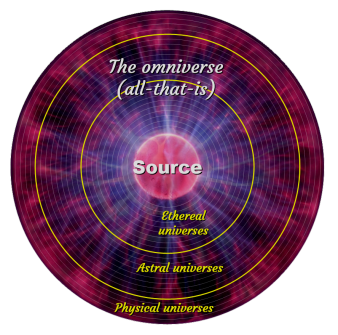 Life-energy from the source fills the omniverse, creates countless universes, and nourishes everything. Our personal connection to the source is the most important relationship ever… but it’s a little more complicated than that.

As explained in other installments, everything unfolds beyond time and space in a way that’s hard to imagine… but apparently it’s even more complicated than that.

Does the life-energy simply stream outward from the source in all directions like a light bulb and nourish each entity directly, as the diagram suggests?

Probably not. And that’s what this article is about:

Let’s focus on the relationship between one human being and the source, since humans are the entities in the omniverse we’re most familiar with. In the bigger picture it doesn’t matter if the “entity” is a person or a tree, a cell or molecule, or a planet or an entire universe. The most important relationship everywhere in the omniverse has always been the connection between one entity and the source. Everything is nourished first and foremost by the source. But for this article we’ll think about a person.

So, of all the vast quadrillions of entities in the omniverse that have intimate connections with the source, we’re going to observe just one person to see how life-energy gets passed from the source to the person.

Seven spirit bodies are often associated with the physical body and go by various names, such as: the etheric double, astral body, higher-astral body,  mental body, essence body, celestial body, and divine body. (This diagram was updated in response to the first two comments at the end of the article.)

First we sort of pull apart the omniverse like an accordion file so that we can see things more clearly.

The human being is in the physical realm, way out in the fringes of the omniverse. He or she has various spirit bodies leading toward the source. Life-energy probably doesn’t stream directly from the source into the person. I suspect it would be too powerful. It would be like the energy current from a power-generating plant being delivered straight to our house. It would burn up our circuit breaker panel and maybe blow out our lights and burn up some appliances.

The electricity from the power station has to be transduced down through a series of transformers and substations before it reaches our house to provide us with safe power.

(Note: That’s probably what happened to planet Eden some 4 billion years ago, which circled the sun in an orbit where the asteroid belt is today; life-energy from the source wasn’t adequately transduced at some point, and the planet was destroyed… but that speculation is beyond the scope of this article.)

So it makes sense that life-energy coming from the source is transduced through many finer beings before it gets to Earth to empower a human being. And it manifests in our world and in our lives in various ways.

(Note: … which is probably why we’ve come up with so many names and descriptions for life-energy: aura, prana, shakti, chi, holy spirit, ruah, mana, orgone energy, and maybe even “quantum wave function.”)

When we feel a divine inspiration, we might attribute it to God or Allah or Brahman—the source—but it’s more likely a message that has been transduced by one of the facilitators or ethereal entities that help manage things in the omniverse. They’re able to receive information from higher levels and convey it to a mind on Earth that’s equipped to handle it.

That said, I think it’s still the best bet on Earth (or anywhere else in the omniverse) to commune with the source. Pray to God, submit to the will of Allah, meditate with a focus on Brahman…. Whatever your spiritual persuasion, focusing on the source instantly sets in motion a vast network of brilliant beings who can help, be they Judeo-Christian angels, Hindu devas and angiris, or Islamic ملاًئِكة.

The bottom line, again, is that the most intimate relationship anywhere in the omniverse is the connection between one entity and the source. As long as that entity is committed to noble values, then communing with the source opens the channel to bright beings who are also committed to the motivations of the source.

So, take the noble path and seek oneness with the source, then unlimited help is at hand! 🙂

She grew up Catholic and says, “Catholics are about morality and they pray to God and have intercessors (angels). Protestants are about a personal relationship with Jesus/God with no intercessors. Buddhists think we are already awakened at the spiritual level. Mystics experience God directly through meditation.”

Mystics, she says, have a close, personal connection to the source through realization of oneness and conscious contact with God. Intercessors aren’t a big consideration, except maybe as a person begins awakening to his or her oneness.

So, again, we’re not sure if her-view versus my-view is just a semantic difference. I see a human being connected to the source through various spirit bodies that are “within” the person—all part of the package—as shown in the third picture above. Life-energy is probably transduced by each of those bodies as it leaves the source, gradually getting slower and denser as it moves through the ethereal bodies and then through the astral bodies before coming into the physical body. By the time it reaches us on Earth, that modified or transduced life-energy shapes our thoughts and attitudes and who we really are. So we do have a sort of direct connection to the source (the power-generating plant of the omniverse), although it goes through several spirit bodies (transformers and substations) before it gets to us.

Each of those spirit bodies is probably influenced by a close circle of friends, just as we in our physical body have friends around us who influence us. Would all of those entities between us and the source be considered intercessors?… or would they just be considered part of our personal package or our cosmic community?….

I don’t really have an answer to that at the moment, but it’s persistently on my mind.