How Did “The Seven” Shape Human History? (6)

The Seven Heavens of western religion (especially Jews and Muslims) are similar to the seven levels of spirit described by Frederic Myers through a medium shortly after his death. 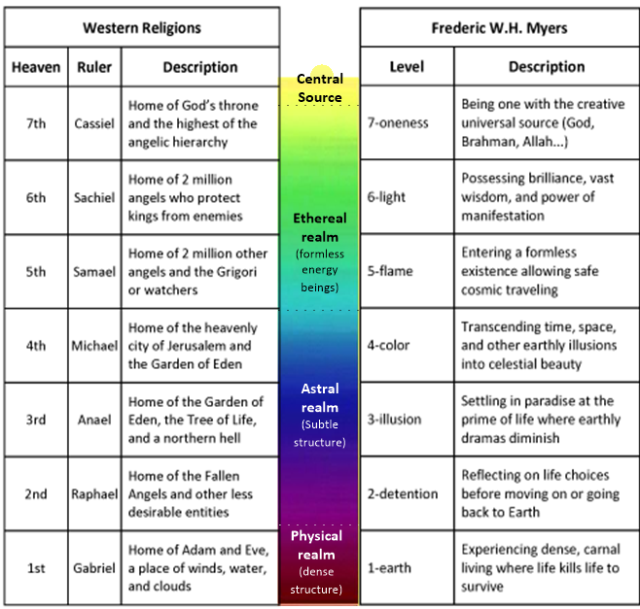 The seven heavens of religion (left) are each associated with one of the seven ruling archangels… who may or may not be (but I suspect they are) the same as The Seven ethereals, or “Rainbow People,” who helped and supported our INIT group between 1995 and 2000, resulting in miraculous communications from beyond.

Nsitden, one of The Seven, is shown here in two (I think) of his embodiments: his subtle human form (left) and his more ethereal or angelic form (right).

(audio clip) We the seven….

Apparently The Seven ethereals have come close to Earth seven times in an effort to establish a rapport with us humans, and to help us rise out of the darkness of savage living.

(audio clip) This is the seventh time…

Their intention this time includes setting up ITC bridges for advanced communication and interaction between researchers on Earth and spirit groups at the third level (illusion). The first of those bridges was established between INIT (via Maggy Fischbach of Luxembourg) and Timestream spirit group, whose sending station is located along the banks of the River of Eternity on a Saturn-sized, third-level planet called Eden or Marduk. I suspect that spirit world Eden is the astral template of a physical planet Eden that once circled the sun between Mars and Jupiter before it was destroyed by its superhuman inhabitants’ advanced technologies some 4 billion years ago (explanation below).

While INIT was flourishing, Maggy received a contact from The Seven stating that six new bridges would be opened somewhere on Earth.  The new bridges were already formed, but their locations on Earth had not yet been determined.

So those ITC bridges are ready to be established between Earth and third-level Eden, just waiting for some of us humans to rally… to develop the right psychospiritual and moral readiness for ITC.

The Myers model is like a modern update of the old religious view of seven heavens associated with the Earth. If we add Myers’s 7-level roadmap to messages from The Seven ethereals, we begin to get a better understanding of the genuine cosmology.

This seven-level roadmap of spiritual life (the ancient one as well as the Myers model) seems to be customized for humans in our little corner of the universe… our solar system.

We carnal humans live at level 1, which was originally developed around a physical planet called Eden, or Marduk. Adam and Eve are probably metaphors for our superhuman ancestors who inhabited Eden until they destroyed their world some 4 billion years ago. The sole survivors of the explosion of Eden were the colonists marooned on Earth.

At that point, then, with Eden out of the picture, Earth became the focus of level 1, and the only things left of Eden were the asteroids, comets, and other shrapnel cluttering up our solar system, and the spiritual templates of Eden that still flourish today at various levels… especially the paradise planet Eden at level 3 where some of us awaken after we die.

When we die, it’s like going through a security checkpoint at a mystical airport.

If we aren’t lugging a lot of emotional baggage, we’re passed through to a concourse (tunnel), and we’re swept away to Eden, a paradise at level 3. After a rejuvenating sleep that can last about six weeks of earth time, we get settled into paradise.

Most of us don’t get passed through the security checkpoint that easily, though, because we’re carrying too much baggage. We’re taken off to the side (level 2) where people help us sort through our stuff to see what’s appropriate and safe for a life in paradise, and what’s not. If we’re willing and able to relinquish the troublesome baggage, we might then be allowed to proceed to the tunnel to level 3. But if we’re attached to all of our baggage, we’ll stay at level 2 for a while as we slowly decide what’s really important to us…

If we stay at level 2, we can choose to work with multi-level networks of right-minded spirits whose mission is to help each other purify their thinking in order to ascend within the network.

(Sometimes our emotional baggage is so cumbersome that we can’t even make it to the security checkpoint. In these cases, we get stuck at level 1 in an “earthbound” state. We move in and out of the lives of physical humans, most of whom can’t see us though they can sometimes sense our presence.)

Once we’re settled in at level 3 we still have an awareness of Earth, and we still lug around some of the light emotional baggage that we were allowed to bring along to paradise. Those emotions can get stirred up again if we’re involved in direct interactions with people on Earth, for example through ITC work or during visits to loved ones while they’re dreaming or sitting with a medium.

While living at level 3 we’re allowed an occasional taste of level 4, in which our astral body becomes lighter, we seem to melt into the cosmos, and we lose touch with all of the troubled emotions of earthly life… until we’re gently pulled back to level 3 to resume our service.

Once we move to level 4 and get settled there, we’re freed from the laws of reincarnation, and the dramas of Planet Earth fade away like a hazy dream.

After living in the unimaginable beauty of level 4, sometimes called The Summerland, we’ll eventually move to the finer ethereal regions of levels 5 through 7. At that point we’re a formless light being or energy being with incredible knowledge, wisdom, and power.

Closing thought: I believe that most of the information above was inherited by Babylon at the beginning of the Second Epoch, after the proverbial flood washed away the last vestiges of the First Epoch (Atlantis), but the information gradually got diluted and misshapen as culture spread among the nations and religions that followed Babylon. The Seven have come close to Earth once again, now, as the sun begins to set on the Second Epoch, to restore the original information. The best they’ve done so far (arguably) is through ITC systems… specifically, INIT.

In any case, at this point in time here on Planet Earth, I think this general scenario is about as close as we’re liable to get to the truth about our spiritual heritage. (And I don’t say that lightly, nor is it an ego thing; I’ve given the matter considerable thought and done a lot of research… and it’s just what I’ve come to believe with some certainty.)

Our spiritual nature?… that’s another story.

Main interests are other-worldly matters (www.macyafterlife.com) and worldly matters (www.noblesavageworld.com)
View all posts by Mark Macy →
This entry was posted in Uncategorized and tagged 7 heavens of christianity, seven heavens. Bookmark the permalink.

5 Responses to How Did “The Seven” Shape Human History? (6)