Thirteen years ago it was the Columbine High School massacre.

Then, a week ago, a graduate student of neuroscience brought an assault rifle and other weapons to the opening of the latest Batman movie at the Century 16 theater in Aurora… and opened fire on the audience.

I’m familiar with that part of Denver, where the theater tragedy occurred. It’s on the battle line between homelessness and desperation on one side, and healing and redemption on the other.

On the other side are CeDAR recovery center and UCH hospital, committed to helping troubled individuals climb out of their dark hole… into the light.

The student/slayer was living and working right along the battle line. He was working on his graduate degree at UCH, and his apartment (which he booby-trapped with explosives before going on his spree) was a few blocks away from CeDAR. 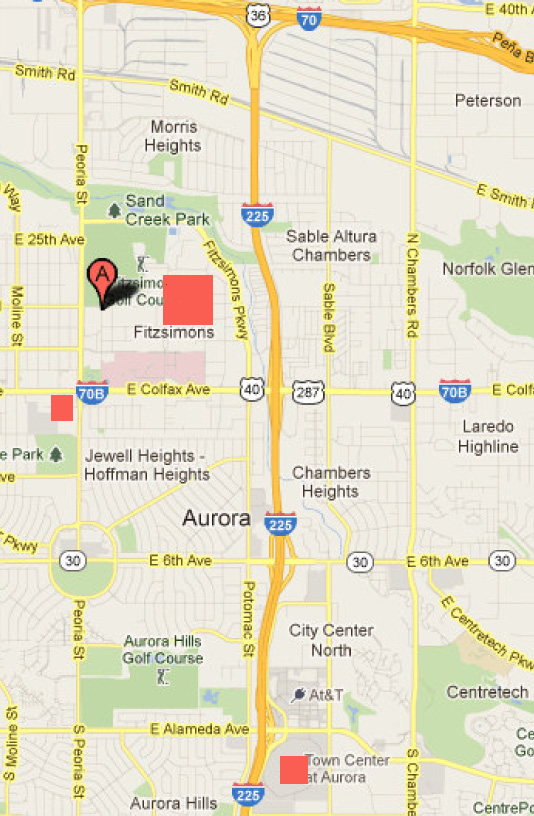 By all appearances, the student was a traitor in the local battle between light and dark—working and studying with the healers then defecting to the violent side.

The question is, why?

I’m familiar with the area because a good friend of ours—a wonderful fellow—went through addiction rehab last year at the CeDAR recovery center, and I visited several times… even attended a week-long workshop to learn more about “dual diagnosis” (addiction plus mental illness) and how to deal with its fallout.

I’m also familiar with the battle, having an addictive personality myself, and also having kept abreast of the evolving situation in the USA since the 1960s in terms of healthcare, social mores, and the swelling ranks of addicts, alcoholics, and mentally ill.

The battle against homelessness, crime, addiction, and mental illness here in the States is being lost for a couple of reasons… well, probably for many reasons, but these are two big ones:

First is a dysfunctional private healthcare industry that by definition must cater only to those who can afford its expensive treatments. When healthcare is a business, profit has to be the bottom line… and the swelling ranks of poor and homeless people invariably fall through the cracks, often resorting to crime.

The solution to that problem is a public healthcare system, which I’ve explored in laborious detail elsewhere… and hopefully it’s just a matter of time before it becomes a reality in the USA.

The second reason we’re losing out to homelessness, addiction, and violence is more ominous. There’s an invisible battle raging behind the scenes, affecting all of us… and especially alcoholics, addicts, and violent criminals.

This is the battle I’ve been studying for the past two decades.

When troubled people die, their spirits linger near the Earth, moving in and out of our lives, affecting our behavior. They become attached to susceptible people in a parasitic relationship, and the human hosts inherit their compulsions and cravings. Among the most susceptible are drug addicts and alcoholics.

At the same time, light, angelic forces are always close to the Earth to guide and support those of us who are willing and ready. They can help a person rise above the dark spiritual residue, and they can strengthen those committed to spreading light in this dark and troubled world.

Read more about those spiritual influences…

So, Earth has become a battlefield for those two invisible forces vying to influence humanity—the troubled, parasitic spirits who act out their repulsive dramas through our lives… and finer ethereal beings ever summoning us to accept and spread their light and love.

When the dark forces win us over, as they did in Aurora last week, the results are tragic. 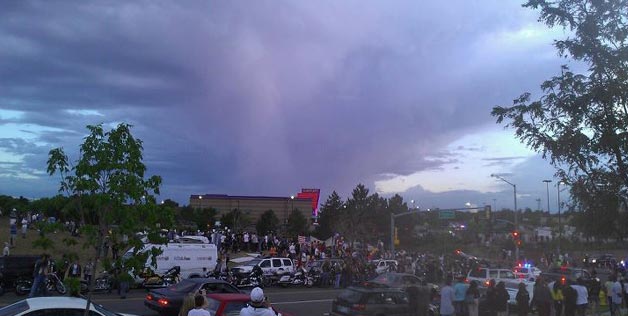 This photo was taken by Crystal Fuller at last Sunday’s vigil for the victims of the “Dark Knight” massacre in Aurora. Whether the angel in the clouds is coincidental and symbolic, or whether it was choreographed by finer spiritual forces as a sign that they were on the scene taking care of the vicitims (I suspect the latter), it’s certainly a compelling image… hovering as it does over the Century 16 movie theater. MM

To avoid the dark influences, simply make it a point to stay anchored in the light. Learn about our spiritual nature, especially the light source inside each of us, and take the time now and then to move to that place of peace within.

That will raise your spiritual vibration, clear you of unwanted influences over time, and eventually attract ethereal beings to assist you on your path.

A Device to Remove Troubled Spirits

I’ve begun work on a device and specialized technique that I hope will safely, effectively, and immediately clear a person of parasitic spirits.

I’ll write more about it in this blog as it comes together and I start trying it out.

If it works as I expect it will, those invisible battle lines will be redrawn significantly!

Other articles about science and the human spirit:

2 Responses to Aurora Theater: Another Tragedy Close to Home