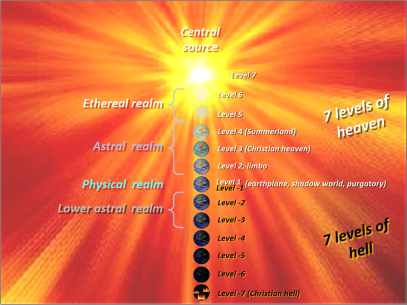 Trying to figure out the afterlife for the past 30 years has been like assembling a giant jigsaw puzzle. Whenever I think it’s nearly complete, I discover that a few big pieces are still missing… or I realize that it’s all part of a much bigger puzzle that I didn’t even know existed… and so the work continues.

As I find new pieces to the afterlife puzzle, I usually write about them in one article or another, so they end up getting scattered around this website. It occurred to me last week that it would be nice to put it all together from time to time in a way that provides the most complete and up-to-date spirit world map or model that I can come up with.

This article is my first attempt to do that. In the future there might be more of these comprehensive “afterlife updates,” maybe every year or two? 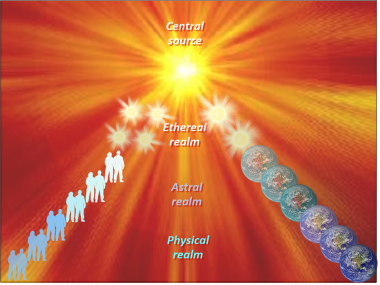 Here’s the spiritual premise upon which the puzzle is built, the same basic premise that’s been stated by the great mystics and prophets down through the ages:

Our material world (Earth), as well as our entire material universe, is superimposed by many invisible spirit worlds and universes flourishing with spiritual life, each remaining distinct by its vibration, like radio signals. All of these material and spiritual universes are created and sustained by a living central source that emits pure, perfect consciousness. That creative consciousness and its source are the reality. The many worlds and universes look and feel real to their inhabitants, but they are just illusory parts of the bigger picture. That central source goes by many names. Christians call it God. Muslims call it Allah. Hindus call it Brahman. There are many human cultures with many names for the source.

The source is perfect love, pure wisdom, and complete knowledge. It is the omniverse.

That single source exists not only at the center of the omniverse, but at the center of each thing in the omniverse… as though it exists simultaneously and omnipresently as one massive source and as trillions upon trillions of pieces. Hence the age-old axiom: We are all one. The piece of God living within each of us is sometimes called a soul or rūḥ or atman.

That’s the crux of our spirituality:

Our material universe is way out in the fringes of the omniverse, where light from the source grows dim, and so some inhabited physical worlds such as Earth can develop pockets of darkness around them, in which unimaginably malevolent and grotesque spirits can be created by the darkest thoughts and the most ghastly behavior of the planet’s carnal inhabitants.

If a dozen people living in the same city were asked to sketch a map of the city based on their experiences, we’d wind up with a dozen different maps. Likewise, there are many, many universes in the vast omniverse, and different groups (on Earth and in the spirit worlds) use different maps or models when trying to understand and to navigate the omniverse.

While we’re alive on Earth we’re at Level 1. When we die, most of us will awaken either at Level 3 (an earth-like paradise) or at Level 1/Level -1 (a shadow world of spiritual residue surrounding Planet Earth, sometimes called “the earthplane”). People of general good will tend to awaken at Level 3. People who are totally wrapped up in worldly drama or are addicted to substances tend to stay at Level 1 in order to perpetuate the drama. They stay involved in earthly affairs. Most of us carnal humans can’t see them, but they can see and interact with us. Sometimes they show up vaguely on film and video. Some people can hear their voice-like thoughts in their heads. They’re stuck here for a while. They can’t “move on.”

People who led exemplary lives of love, trust, and decency might awaken in finer, lighter levels of “heaven” (Level 4 or 5). People who led more depraved lives spreading fear and animosity might awaken in some of the darker, denser levels of “hell” (-2 or -3 or -4…) before struggling their way back to lighter spirit realms. They do this by acknowledging their mistakes and helping others… much the same formula that we on Earth use to find inner peace during our short lifetimes. That seems to be a sort of law of spiritual physics everywhere: Get “closer” to God by being more God-like.

Another inviolable rule throughout most of the omniverse is, like attracts like. After we die we invariably migrate to communities of spirits who resonate with our temperament.  As a result there are no hidden agendas in those realms. Spirits can perceive each other’s thoughts and feelings as clearly in the spirit worlds as we can see each other’s clothes here on Earth. So the king is indeed naked.

Earth is apparently an exception to that law of resonance. Here, people of diverse dispositions and motivations are tossed into the same world and have to figure out ways to try to get along. We can harbor hidden feelings and hidden agendas that stir up suspicion in those around us. Hence the dramas here on Earth, which have created many of the spirit realms in hell (Levels -1 through -7) and in the lower heavens close to Earth (Levels 1, 2, and 3).

Why is Earth an exception to the law of resonance?  Is Earth the only exception, or do all inhabited physical planets thrive on drama? I’ve yet to figure that out.

Morphing from the Divine to the Hideous

If we could catch a bus for a tour of the spirit worlds between Earth and God—the seven heavens—we’d find human spirits living in very earth-like conditions in Levels 1, 2, and 3, but by the time we get to Level 3, the spirits are much more refined in their behavior and appearance and living conditions than people on Earth.

One of The Seven appearing in two forms (I believe): human-like and ethereal (circled).

In effect, the spirit worlds morph from human to godly as they rise in vibration from the earthplane to God.

Or if we got on the wrong bus back on Earth and embarked on a tour of hell, the spirit worlds would morph the other way… from earth-like to utterly grotesque.

Levels -2, and -3 are dark and dismal. Facial hair and blemishes are the norm.

Levels -4 and -5 and -6 are darker and more dismal. People are bent and deformed.

Level -7 is the proverbial hell with sulfurous flames created by the malevolent thoughts and desires and intentions of its grotesque inhabitants, including people who enjoyed torturing and murdering during their lifetimes and those who destroyed other people’s lives through their own very selfish pursuits and pleasures.

(Much more information here about the darker realms….)

So, if you want a nice afterlife, be kind and helpful to people and to other inhabitants of Earth before you leave… no great revelation there.

(I’ve tried to write this article with an easy flow. There’s a good chance I’ll add stuff to it in the coming months, in which case I’ll make an effort to preserve the flow. Eventually I might find enough new puzzle pieces to create an entirely new Afterlife Update.   – Mark Macy)

Source Material (Where the Puzzle Pieces Came From)

Timestream is at Level 3, where humans in spirit live much as they did on Earth, but under much nicer conditions.

I got the information for this article from various sources:

While Timestream told us about the paradise world they live in (where many people from Earth awaken after they die), and while The Seven shared life-changing and world-changing information (especially about our ancient past)… they only hinted about the dark, unsavory spirit realms around the Earth. One of the Timestream spirits named Swejen Salter told Maggy Fischbach about a “shadow world” of the Earth where rather dense spirits hang around close to our world, move in and out of our lives, and make weird things happen, including crop circles and (presumably) spirit possessions and “hauntings.” A spirit friend named Konstantin Raudive told me through a radio in Luxembourg, “You know by experience, Mark, how dangerous drugs of all kinds can be. Try to warn humanity that they not only alter their present life on your side, but also influence in a negative way their future lives.” The Seven warned us, “You already know that pharisees, ghouls, swindlers, thieves, yes, even murders, have their interested supporters here among the dead….”  Except for a few hints like that about dark, unsavory spirit scenarios, Timestream and The Seven made it clear that ITC researchers should focus their attention on the finer realms of spirit and should also polish up their own character in order to resonate with those finer realms… not to get distracted or side-tracked by the drama and dissonance in the darker realms.

Early in my work with Maggy I had several dreams of visiting the spirits at Timestream and observing the equipment they were using to communicate with us here on Earth. After finishing the summary of Franchezzo’s Wanderer book I had a short but vivid dream of visiting him and his beautiful, twin-soul, lady-friend in their lovely paradise villa where they eventually ended up together, and they gave me a quick “Grazzi” before I returned home and woke up. From these and other dreams I know (subjectively, of course) that this endless interplay between Earth and spirit is a reality, and this evolving puzzle is valid… though by no means absolute. A complete picture of the omniverse is probably impossible from the vantage point of Earth. Still, I think this is a small step in the right direction.