Editor’s note: In ITC contacts involving images, when the spiritside sends a picture, it is not known when, in what form, nor even whether it will be received earthside. Much depends on the “receptivity” of the researchers on earth – – their personalities, ideas, desires and thoughts. As an example, let’s imagine that Abraham Lincoln (assassinated US president) or Olof Palme (assassinated Swedish prime minister) is at the sending station and the experimenters are now sending a picture of him — an exact likeness of how he currently appears in his astral body – – to a group of six people on earth.

When will the picture arrive? If the receivers are all ITC researchers, all intimate friends who share a deep faith in the experiment and a strong commitment to ITC, then the picture may appear within moments of the sending. If several of the receivers happen to be newcomers to the group who are currently in awe of the project, but within two weeks will become comfortable, enthusiastic team players, then the picture may appear in two weeks. If the receivers are six very strong psychics with several different beliefs about the famous politician (one perhaps believing that he is now an angel with wings, another believing that he has reincarnated and could not possibly be at the astral sending station, etc.), then their powerful mixed thoughts might jumble the contact field to the point where a picture will never arrive.

How will the picture look? Again, if the receivers are a tightly knit group of experienced, objective ITC researchers, the picture may be an exact likeness of the late leader as he appears in his current astral body. If the receivers are a cross-section of US citizens, or Swedish citizens, the picture may come out looking like “Honest Abe” on a $5 bill, or Olof Palme on a postage stamp, since that’s how most citizens mentally view their famous leaders.

These are the sorts of technical considerations that influence ITC in a big way. The actual equipment is a minor issue. The researcher (Maggy Harsch-Fischbach) who received the following contacts, and many other contacts like them, made few technical adjustments to her equipment. She simply possessed a television, a computer, a powerful psyche… and had a devoted spirit group (Timestream and The Seven ethereals) who could make it all work together in miraculous ways.

Here, Maggy has a long chat with her spirit friend, Swejen Salter, on the subject of trans-images. I’ll include a few pictures from Maggy’s early research reports, so you get an idea… MM

When transmitting pictures of human beings and other entities, our collaborators can only present the former as images of their own mind. The manner of representation is not important to them, but it is to us and therefore does not always satisfy us.

A Christian can see an angel in a higher being. A Hindu or Buddhist sees someone else. By still others they are perceived only as radiating light.

For these reasons Timestream and Central consider carefully how a person is represented. The picture arriving at our computer is a composite representation of how a person is seen by several beings, not just by one.

Swejen Salter comments on the difficulties of picture transmission as follows:

Spiritside: When transmitting pictures of higher beings we are dependent on the help of a larger spirit group. You surely noticed that the picture of Seth 3 and the picture of Angele Mreches were produced with a different technique than the pictures of Konrad Lorenz, Tom Edison, George Cukor, Jean Pierre Scherer, Marie Mreches, etc.
The problem is this: it is easier to transmit the image of a person who has lived on earth than to depict a higher spirit being. Human beings can assume the density of the body and former appearance on earth. Higher spirit beings cannot accept the density of the human body, at least not in the same way.

Angelle Mreche, the researcher’s late aunt (an ethereal being) 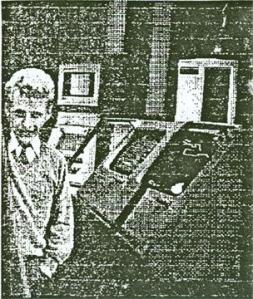 Earthside: How can I understand this? Angele lived on earth for 12 years and could have adjusted her body density as easily as other human beings.

Spiritside: In truth, Angele does not belong to the human line of development. She is a nonhuman being like the Technician or Seth 3. They can incarnate in a human body or show themselves in body on our side. The human body plays only a minor part for them. They accept it because it allows them to get to know us better and to study mankind much better. All information such an entity gains about human existence is automatically transferred to other beings of its kind. Angele remembers little of her years on earth. Her years of incarnation were of minor importance to her…

If we used the same transmission method for Seth 3 and Angele that we use for humans, you would not recognize them. They are not “real” humans anymore.

Earthside: I remember picture transmissions of you and Angele on which your faces could barely be recognized. We did not publish these pictures. It is strange that your clothes were visible but your faces and hands fused with the light rays.

Spiritside: These pictures were experiments which did not satisfy because you could not recognize too much. We then tried to find other methods. Although I do not yet belong to the group of entities such as Angele, I was at the moment of picture-taking in the same area of light rays as she was.

Earthside: But you are already visiting the fourth level. Don’t you already have experience with non-human life?

Spiritside: Yes, that is true, but to maintain the connection with you, I have to take on the astral body again.
What I still wanted to tell you: to transfer the transparency that constitutes the body of a higher being, we need an adequate “transparent” method to visualize it in the density of your world. The technique we use is a “point-by-point” transfer until the face is recognizable. It is a “transcription” of what we see here. We might say it is a trans-visualization with the help of a common artificial intelligence (the computer program).

During this talk Swejen again said how much Susanna Lehnhoff, the wife of the painter Edouard Manet, and Jules Verne’s former wife (Honorine deViane) have used their talents to help the experimental group of Timestream with their picture transmissions.

Swejen also mentioned that both ladies at first were not at all interested in ITC experiments.

Spiritside: We had repeatedly asked for their cooperation, but they refused by reasoning: “Why be concerned with these contacts with earth when different and more pleasant possibilities are open to us here?” I persisted, and it came to several small arguments between us before I convinced them. They now accept that the contacts are important for everyone’s life. They have received great recognition for their work and their skills here at Timestream. I am now on friendly terms with both ladies and would be grateful if you mentioned them in your writings.

We are told that children who die at a young age (such as Maggy’s Aunt Angie, who died at age 12) are sometimes incarnations of ethereal beings who want a taste of life in this rugged world, but who opt out of a long, grueling lifetime of day-to-day dramas that can drag down the lighter, finer spirits among us.

Ethereal beings apparently are of too fine a vibration to be ‘captured’ through astral photographic techniques of our spirit friends, so they are first “painted” by gifted artists-in-spirit in sort of pointillist technique, and the created images are sent to Earth.  – – – MM